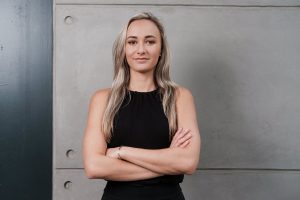 For Kimberley Taylor, the brain behind Loop, one simple question, a task on a university assignment, set the trajectory of her business.

“I think there were only nine questions on the project and one of the questions was to write a route optimisation algorithm. Let’s say 10 places need 10 deliveries at different locations. It [the algorithm] would optimise where should I go first, second, third, etc. and that interested me.

“I was interested in whether there were logistics companies/ people who were doing deliveries that were using an algorithm to help their drivers be more efficient and I remember just falling in love with building and coding at that point.”

If we rewind and ask Taylor about school, she’ll admit that her two favourite subjects were art and maths. “This is the problem solving part of me: understanding how things work. The two parts of me that love creating: the visual, building, and creating side and then there’s this problem-solving side. I feel like it really touched on my big interests growing up, which are art and maths.

The daughter of a single mom who worked full-time, Taylor was raised to be resilient, independent and self-reliant, which is why she didn’t shy away from choosing engineering when it came to picking her university degree in her final year at school. “I pour energy into figuring it out. I’ll just get it right,” she says.

Loop is a flexible, user-friendly delivery management software that enables businesses to intelligently optimise and scale their delivery systems.

According to Taylor, for these companies, Loop is a game changer. It’s a completely integrated system that links delivery firms to all of their stakeholders. It enables dispatch managers to make delivery decisions based on efficiency and cost, led by data from everyday operations that Loop meticulously examines in order to save time and money for organisations. It’s a fully customisable app that works with every operational tier from the top down.

Operating on three platforms, Loop provides a management console that enables clients with a web-based control portal to monitor logistics 24/7. Operational metadata can be captured and organised for business efficiency. There’s also the Android or iOS driver app and a customer tracking app that allows end-users to track products from the moment they leave the business until they arrive on their doorstep.

The best aspect is that each of these features can be customised for different company models, which is what really sets Loop apart: Its ability to respond in real time to its users’ changing demands.

“In the beginning I mainly spoke to businesses [to figure out their painpoints] and there were a couple of drivers I interacted with. When I saw the interaction with the controllers, getting a pack of papers and then having to deliver to 30 different stops… you just don’t know which way to go first. But when we started the business, that’s when I became even more empathetic towards the drivers, understanding their daily struggles: rude customers etc. I think people don’t understand how hard drivers are hustling to get an order delivered quickly.

“Little things like knowing the drivers or them being excited by the fact that the customer now knows their name and you’ve been greeted, were also important to them. So that’s something that we stay quite close to: the different key people who are utilising our software. We are constantly trying to look at the world from their perspective to seriously, deeply understand how to make them happy, and I like knowing I’ve made the days a little bit easier.”

Copy and paste this URL into your WordPress site to embed

Copy and paste this code into your site to embed