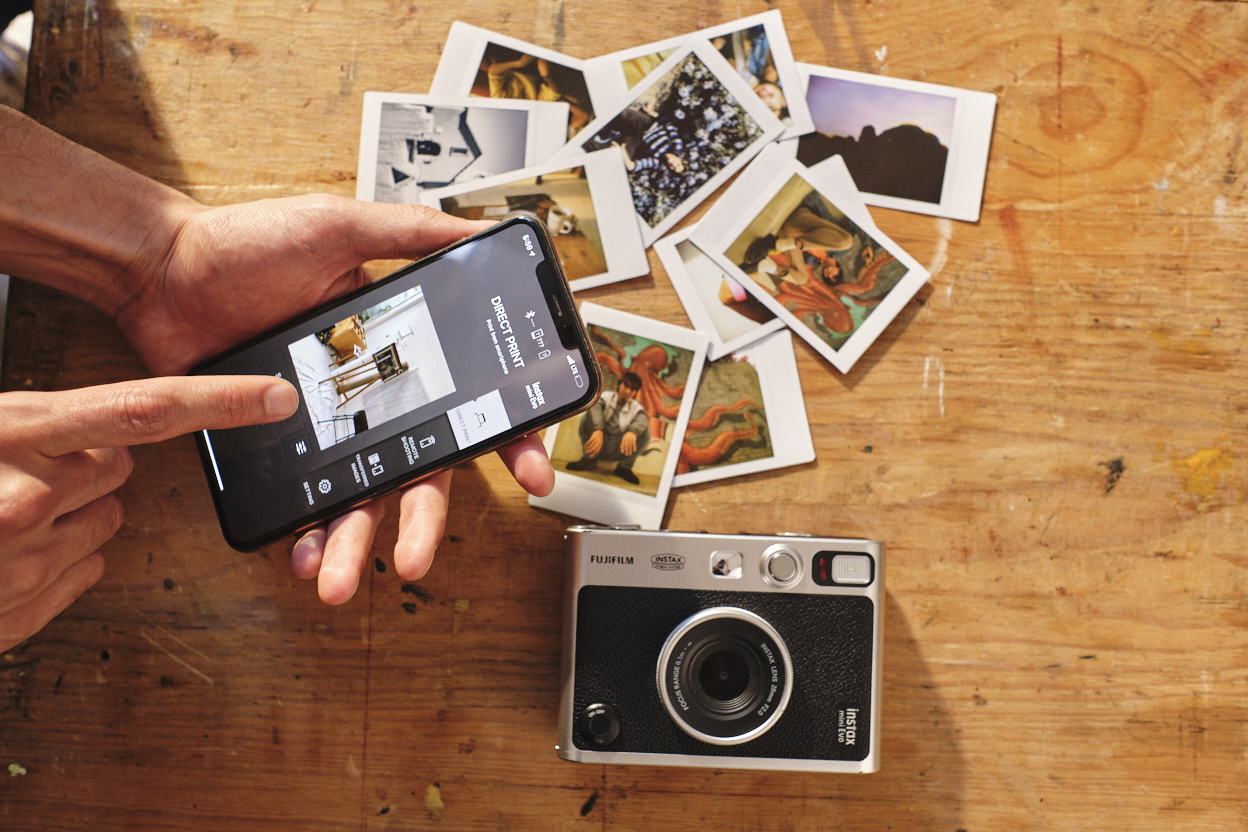 Fujifilm South Africa has just announced a new camera to its Instax line-up, the Instax Mini Evo. The Instax Mini Evo is a high-end hybrid camera for individuals who have always wanted a more versatile Instax.

The Instax Mini Evo can do so much more. It all starts with the Instax Mini Evo’s hybrid capabilities. This includes the option to select and alter photos before printing, and a variety of adaptable shooting effects that are reminiscent of retro and classic film cameras.

For photographers who want to communicate unique feelings through their photos, ten lens effects (such as Soft Focus and Light Leak) can be coupled with ten film effects (such as Vivid, Monochrome, or Pale) to create up to 100 different shooting effects.

By twisting the lens dial or using the scroll wheel at the back for film effects, photographers can select their preferred lens effect. Once the perfect combination is found, the photo can be printed by pulling the print lever at the back – similar to the film advance lever found on 35mm film cameras. Fujifilm has ensured greater print quality on the Evo, with the resolution of the exposures now double (638 x 318 dpi) compared to previous models.

A lot of thought has gone into the Instax Mini Evo’s design, which, like some of its capabilities, is, I’ll say it again, reminiscent of film cameras. The Mini Evo looks like a premium camera with its silver finish and black leatherette pieces, the easy positioning of buttons, the print lever, and dial.

Photographers may frame their photographs using the 3″ LCD monitor, which allows for easy control both horizontally and vertically. Photos captured with the camera can be saved to the onboard storage, which has 45 images capacity, or to an optional MicroSD card.

The camera body is rounded-off by a 28mm F2.0 lens, which allows focusing as close as 10cm. It’s ideal for close-ups and those favourite selfies. This while the onboard Lithium ion battery can print 100 pictures from a full charge.

It’s a printer too

As the flagship model, the Instax Mini Evo adds a new function to the Instax lineup: the ability to save printed photos to a smartphone. The function, dubbed “Transferred Images,” is accessed via an app. It saves photos printed with the Mini Evo to the photographer’s phone, complete with the Instax frame, ready for posting on social media. Surprisingly, the software may also be used to remotely take photos using the camera.

Another feature of the Instax Mini Evo’s that photographers who have a collection of photographs on their smartphone with find handy is “Direct Print”. Direct Print allows users to print photographs directly from their cellphones, which makes the Mini Evo a portable printer too.

Just like the recent Instax Link Wide printer, the Mini Evo offers photographers the ability to print in Instax-Natural mode for the softer tones produced by Instax prints, or Instax-Rich for enhanced saturation and bolder colours.

Meant for photographers to “Show how you see the world”, the flagship Instax Mini Evo is expected to land in South Africa in January 2022, with the retail price to be announced closer to the date.

There’s also a new Instax Mini-format film being launched called Stone Gray, which provides a grey frame accentuated with metallic silver for a unique look, retailing for an expected R169 for a pack of ten sheets.