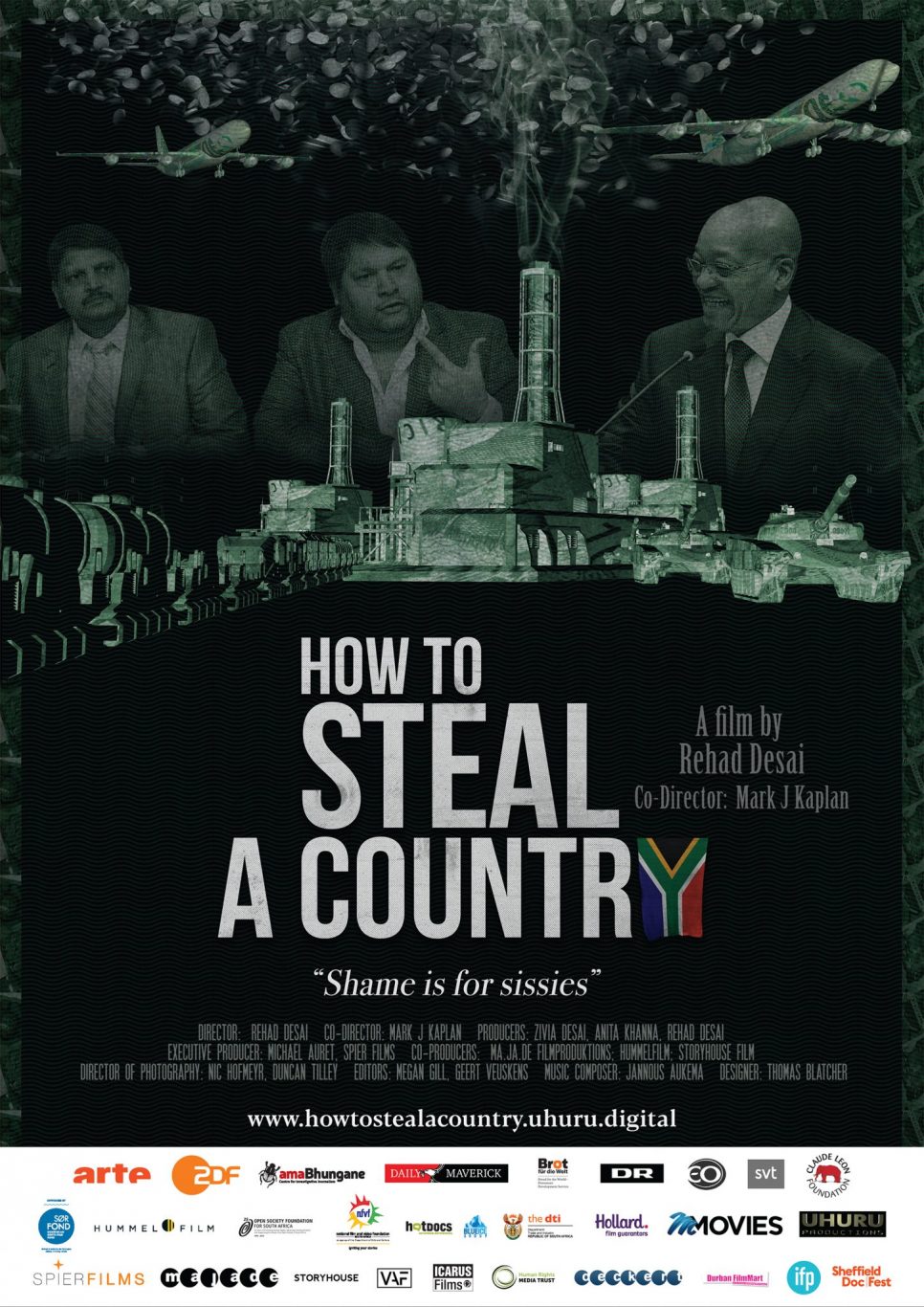 How To Steal A Country on Showmax now

The documentary How To Steal A Country which looks at the dealings of the Gupta family is now streaming on Showmax, just in time for the Freedom Day. This is not something you want to miss.

With the Emmy-winning Miners Shot Down and One World Human Rights Documentary Film Festival winner Everything Must Fall, Rehad Desai made the definitive documentaries on Marikana and #feesmustfall respectively.

Now, in How To Steal A Country, co-directed by Emmy winner Mark J Kaplan (The Village Under The Forest, The Lion Sleeps Tonight), Desai turns his unflinching gaze to another defining moment in South Africa’s recent history: the rise and fall of the Gupta family.

As editor Ferial Haffajee speaks about the Guptas, “They came here as traders. They sold shoes out of the boot of their car… And they left here as multi-billionaires.”

Desai’s take on how they accomplished that is a suspenseful detective story uncovering one huge bribery scandal after another, involving the top echelons of political power and several well-known multinational corporations.

As investigative journalist Thanduxolo Jika says in the documentary, “It’s been almost ten years of unabated looting. They estimate that it’s close to a trillion that the whole state capture debacle cost the country. A country that has got the highest unemployment rate, the highest rate of people who live in poverty. A trillion could have changed their lives.”

“The country has never known anything other than state capture – under Apartheid, it was the same,” says Kaplan. “So in a way, everything that we’re experiencing was built into the system. The Guptas didn’t invent anything – they just perfected it.”

“Part of state capture in South Africa was not just the extraction of funds from institutions like Eskom or Denel or whatever it is,” says then finance minister Pravin Gordhan in the documentary. “It was also the capture and the almost decapitation of the relevant law enforcement institutions. You had a double whammy. You had the freedom to steal but you also had freedom from prosecution.”

In How To Steal A Country, journalist Richard Poplak traces the turning of the tide against the Guptas to their landing at Waterkloof airbase, a National Key Point, for a family wedding. “I think one of the defining moments in the history of democratic South Africa was the landing at Waterkloof,” says Poplak. “This moment of overreach where they flexed so much muscle, you know, they strained their biceps so massively, they actually tore through their clothing and we got a peak at how this actually works.“

Former president Jacob Zuma’s firing of two finance ministers in quick succession raised further questions, but the smoking gun was the #GuptaLeaks – a trove of over 300 000 emails and documents akin to the Panama Papers, laying bare the modus operandi of the Guptas and their associates.

“The Gupta leaks are this huge treasure trove,” says investigative journalist Susan Comrie in the documentary. “What we figure out from the leaks is that you’ve got Gupta lieutenants heading up state-owned companies. You’ve got ministers that are in their pockets; you’ve got these all-expenses-paid trips to India, Dubai. We figure out that the president’s son has a residence permit in Dubai. I mean the emails really confirm the inner workings of deals that have been made between Gupta companies and particularly the big state-owned companies, Transnet and Eskom.”

Speaking about the Gupta leaks, Poplak says, “I’ve tried to describe to people all the time what it’s like to be inside those emails. You kind of feel the revoltingness sort of rise up your oesophagus as you go along.“

“The problem with the news is we get all these snippets and small parts of the jigsaw puzzle but we never get to see the full picture,” says Desai. “This film in many ways was a response to the then minister of finance’s appeal to join the dots – and from the feedback we’re getting, people find it jaw-dropping and gobsmacking and surreal when they see it all.”

“At times the documentary is hard to stomach because we are reminded of how brazen the looting was,” says Kaplan. “And how close we still are to becoming a failed state in big part as a consequence. What we have tried to do in the film is to show just how bad it was. But, in actuality, it was much worse.”

“I think the post-COVID world will have a lot less tolerance for this kind of thing,” says Desai. “It’s clear we need a different type of society and that all available resources will now be required to make society less vulnerable.”

Former president Zuma and the Gupta family have repeatedly denied any wrongdoing. To date, there have been no successful prosecutions of people involved in state capture,

Watch How To Steal A Country first on Showmax.